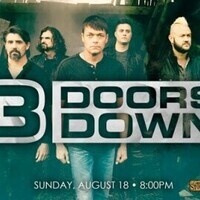 In late 2014, 3 Doors Down- BradArnold, Chris Henderson, Greg Upchurch, Chet Roberts, And Justin Biltonen- wrapped up a marathon of touring that included the cyclesfor 2011's Time of My Life, which debuted at #3 on the BillboardTop 200, and The Greatest Hits, a year later. Along the way, they welcomed Chet and Justin into the fold in 2012 and 2013, respectively. Us And The Nightwould make for their first studio experience together and formally open up a new chapter for the group."The creativity between the five of us hadn't been tapped yet," explains Chris. That made the whole process really interesting because everybody was bringing different ideas to the table. The boundaries totally opened up. Chet and Justin kept pushing and pushing, and none of us wanted to stop."