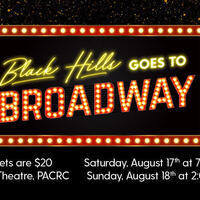 Black Hills Community Theatre  joins with local nonprofit group Music Adds Up to present a musical theatre concert of  as a fundraiser event for the two organizations. Black Hills Goes to Broadway has been an annual fundraiser for Music Adds Up for the past four years and this will be the second time that BHCT will be involved. To celebrate the 5th Year of the event, this year’s musical theatre revue focuses on musicals that won the Tony Award for Best Musical. Shows featured include South Pacific, The Sound of Music, Hello Dolly, Cabaret, The Lion King, Rent, Dear Evan Hansen and others. The majority of proceeds from this fundraiser will directly impact elementary school music education in Rapid City Area Schools.