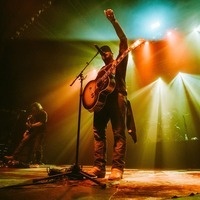 Wetzel “smashes more rules and emerges as the outlaw of the 21st century”! Texas-born Wetzel grew up “living” music as a kid from both his parents and grandpa. He writes and sings of true events at his sell-out shows!

2017 debut album Noise Complaint became a hit with songs such as “February 28, 2016”, “Something To Talk About”, and “Fuss & Fight”; each having millions of Spotify streams. It continued with his more current album release in 2019 Harold Saul High and 2020 anthem “Kuntry & Western”, all of this helped contributed to Koe inking a deal with Columbia Records.

The 63rd Annual Black Hills Stock Show & Rodeo® will be January 29-February 6, 2021. The 10-day stock show will include Cinch® Trade Show, 2-day Horse Sale, 10 breeds of cattle shows & sales, The Original Ranch Rodeo, and Broncs for Breakfast Ranch Bronc Ride. Concert tickets are on sale NOW and can be purchased at the Central States Fair office or online at www.blackhillsstockshow.com