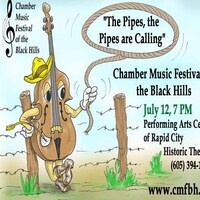 "The Pipes, the Pipes are Calling..."
The program is inspired by folk songs, including Beethoven Irish songs, the American songster Stephen Foster, Smetana, Dvorak and Borodin.
The concert will feature baritone, Tobias Greenhalgh whom you may remember from our 2009 and 2010 seasons where Tobias was a student at Johanna Meier’s Opera Institute. Tobias is now recognized as one of the top operatic baritones with a career spanning Europe, the U.S. and Asia.