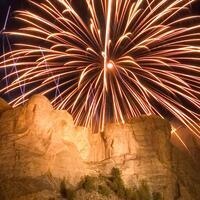 The Mount Rushmore fireworks are back! Seating is limited to ticket lottery winners purchased on recreation.gov.

A great lineup of on-site programming throughout the day on July 3 is being organized. There will be hoop dancers and Lakota storytellers sharing the state’s Native American culture, performances by the United States Air Force Academy concert band and many other talented people. Additionally, there will be incredible performances and flyovers in partnership with the United States Air Force and South Dakota's own Ellsworth Air Force Base.

Mount Rushmore National Memorial will be closed to the general public on July 3 and only ticket holders will be allowed on-site that day.