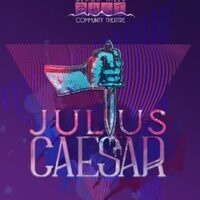 Julius Caesar, a drama at the Performing Arts Center of Rapid City put on by the Black Hills Community Theatre.

Set in Rome in 44 BC, the timeless Shakespeare classic depicts the moral dilemma of Brutus as he joins a conspiracy led by Cassius to murder Julius Caesar to prevent him from becoming dictator of Rome. Following Caesar’s death, Rome is thrust into a period of civil war, and the republic the conspirators sought to preserve is lost forever.