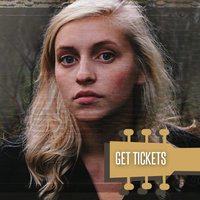 With over 7 million Spotify streams and counting, Nebraska-based songwriter Andrea von Kampen has quickly established herself in the recording studio and on the road. Her deft guitar work and intuitive song construction display striking maturity, and her effortless vocal delivery has been praised by Hear Nebraska as “soulful and worn-in.”

The Gossamer Strings is an old-time folk music duo with rich harmonies over beautiful instrumentation on guitar, banjo and mandolin (no, not all three at the same time), and haunting original songwriting by Kyle McGonegle and Liat Tova Lis. They unravel a new story in each song with clear and heartfelt singing that exposes the emotion hidden in the verse. Their tight instrumentation brings each song to another level, as the pair breathes together, not just in their harmonies, but also through their instruments. The pair invites listeners into their world with warm conversation like old friends.

Doors open for this intimate Tap Room performance at 8 p.m. with music beginning at 8:30. Advance tickets are just $10 and can be purchased online, in the Miner Brewing Co. Taproom, or by calling 605-574-3898. Prices increase to $12 on the day of the show and tickets will only be available in the Taproom.