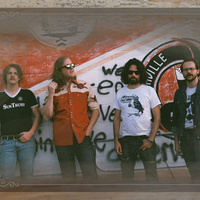 Teddy and the Rough Riders
Luckily for us, Teddy and the Rough Riders have been burning up the Nashville underground over the past few years. With roots deep in psychedelia, the group stripped back all the trimmings to a Velvets rhythm section and steeped it in a Music Row dive bar for their own brand of country rock that is poppy, precise, well-educated and completely self-aware. What, then, would be the point of an exaggerated drawl or a convenient new interest in roping cattle? The Teddys’ sound is country that, somewhat paradoxically, lives and breathes in the city.

Emily Nenni
Hailing from the Bay Area of California, Emily Nenni grew up listening to the girl groups of the 1960s. Some of her earliest memories were listening to 60s compilation CDs in the back of her parents car on the way to the Santa Cruz beach boardwalk. As a young girl, her mother would clean the house to Patsy Cline, and from here her interest in country music began. Throughout middle school and high school her musical tastes only broadened, including Bruce Springsteen (thanks to her Father), and the Kinks (also thanks to her father). Add in some ranchera flair and Frida Kahlo aesthetics and Emily Nenni’s style was starting to form. After completing a year of school at Columbia College in Chicago, IL country music was still calling her name and Emily decided Nashville was the place to go. The month after she turned 21 she had already found herself in Nashville, on lower broadway, at Roberts Western World. She bribed the doorman with cookies so she could stand by the door, directly next to the band. Those same cookies also bribed the band to let her get on stage and sing. From the moment she opened her mouth the Traditional country crew at Roberts Western World knew they had found another one of their own.

Doors open for this Miner Brewing Music Series performance at 6:30 p.m. with music beginning at 7. Advance tickets are just $12 and can be purchased online, in the Miner Brewing Co. Taproom, or by calling 605.574.3898. Prices increase to $15 on the day of the show and tickets will only be available in the Taproom.

Planning a Rapid City and Black Hills vacation, or just want to see what we’re all about? Download our Visitors Guide where you can explore the land of big dreams and big adventures, where you can truly “Do Big Things” and empower your quest to “Find Your Rushmore” – one that is distinct to every traveler.

Want to receive your guide by mail? Click Here

Stay up to date with the latest information on Rapid City's attractions, activities, upcoming events and more.

By submitting this form, you are granting: Visit Rapid City, 512 Main Street, Suite 240, Rapid City, SD 57701, United States, VisitRapidCity.com permission to email you. You may unsubscribe via the link found in every email. (See our Privacy Policy for details.) Emails are serviced by Bronto within the Oracle platform.