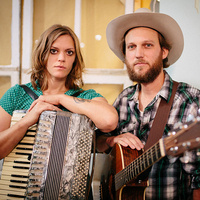 Mallory Graham and Scott Tyler formed The Rough & Tumble in 2011, after nearly five years of sidestepping the awkward musical tension between them. Then, four years, three EPs, and one year-long, 24-song challenge known as The Rough & Tumble’s Holiday Awareness Campaign later, the duo decided it was high time to stop sidestepping the tension of the cartoon hearts in their eyes, too. In 2015, the couple sold everything they couldn’t store in boxes small enough to fit in Mallory’s sister’s spare closet, quit their day jobs, admitted they were in love, and bought a 16-foot camper to venture on the open road, playing shows nationwide.

They’ve been out there ever since, recording two additional EPs (2016’s Pieces and Pieces and this 2017’s Cardboard and Christmas Lights), squeezing in a second dog, and their first full-length album, 2018’s We Made Ourselves a Home When We Didn’t Know. With their debut, the folk-Americana duo retraces their mileage back to their footsteps and explores the struggle between going home and being home already when there’s no other home and everywhere is home. Recorded in East Nashville with Dave Coleman, The Rough & Tumble invited a couple of musician friends from their sad-singer-songwriter and rock-n-roll-rebel days to accompany them on a portrait of what has happened so far, and what they hope is still to come.