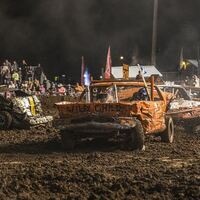 The Mountain States Ford Demolition Derby is non-stop entertainment as derby cars crash, boom and bang for a chance to qualify for the finals and $6,000 worth of cash prizes. The Derby is one of the crowd favorites at the Central States Fair as local contestants from the region compete. The Demo Derby is Saturday, August 22 at 7:00 pm in the Grandstand Arena.