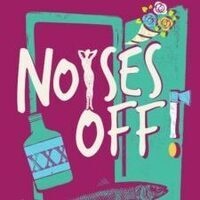 The Black Hills Community Theatre is proud to announce their 51st Season. The final show of the Mainstage season is Noises Off by Michael Frayn. Called the funniest farce ever written, Noises Off presents a madcap look at a theater troupe that includes erratic actors, an arrogant directorand well-meaning stagehands, attempting to put together a show called Nothing's On. Doors slamming, intrigue on and off the stage, and a few misplaced sardines all figure into the plot of this hilarious and classically comic play.