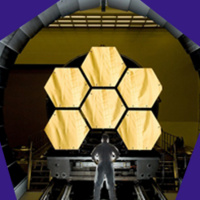 Enjoy our Summer Series - presentations on Black Hills figures or events packed with history and fun! Each presentation lasts an hour, including a Q&A.

What’s next in our goal to understand the universe? Learn about the James Webb Space Telescope, next-generation technology set to replace the Hubble Telescope.

According to NASA, Webb will look much closer to the beginning of time and “hunt for the unobserved formation of the first galaxies.” Another goal will be to look inside dust clouds where stars and planetary systems form today.

The telescope is named after James E. Webb, who led NASA from 1961-1968. He believed in a balance between human space flight and science.

Webb will launch in 2021 on an Ariane 5 rocket - part of the European contribution to the mission.

Ayyangar has been a volunteer NASA Solar System Ambassador since 2018 and is pursuing a master’s degree at the South Dakota School of Mines and Technology. He has interned at both the Goddard Space Flight Center and the Kennedy Space Center.

Ayyangar is also a musician who plays piano, harp, organ, violin, veena (an Indian instrument) and santur (a Persian instrument).