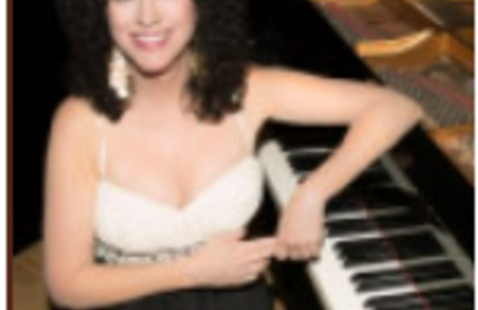 https://www.onthestage.tickets/show/homestake-opera-house/piano-ponderings-with-kathryn-farruggia-the-great-liszt-sonata-89151 #VisitRapidCity
View map
Add to calendar
Save to Google Calendar Save to iCal Save to Outlook

Kathryn Mientka Farruggia performed internationally to critical acclaim as the pianist in the Mientka Duo, which she and her late husband, Tyme Mientka co-founded in 1983. The Duo gave concerts in Germany, France, Italy, Switzerland, and the USA, where they were featured nationally on radio and television. Their debut at the National Gallery of Art in Washington D.C. was received with an enthusiastic standing ovation. They also were featured numerous times on National Public Radio´s Performance Today, and in 1995 they were featured on PBS television in an hour-long documentary, “Almost Famous: the Mientka Duo”. The documentary was subsequently submitted by PBS for an Emmy. The Mientka Duo was the recipient of many honors and awards, including a special prize at the Concours International de Musique de Chambre in Paris. Kathryn holds a Master’s Degree in Music Performance from the University of Southern California. She taught at Montana State University for two years. Subsequently she and her husband moved to Germany, where they lived for eight years, teaching and touring internationally. In 1995 they moved to Colorado. From 1999 to 2004 they founded and directed an after-school music and dance conservatory, a youth orchestra and a youth choir. Kathryn co-directs the Western Slope Concert Series in Colorado, now in its 22nd season, and is a founding member, pianist and music arranger in the cross-over Celtic band FEAST, which has toured nationally with great success and has been featured on PBS. She is founding member of Il Divo Colorado, a singing group which has toured Colorado with great success. She was staff pianist for the vocal faculty for six years at Colorado Mesa University and was staff piano accompanist for the vocal faculty at Northern Arizona University for two years. Her special crusade is promoting the DS 5.5 small keyboard, made especially for small hands. She performs regularly on the keyboard, which fits into her Yamaha grand piano. She and her husband, Charles, recently relocated to Lead, where she performs regularly in the Historic Homestake Opera House.