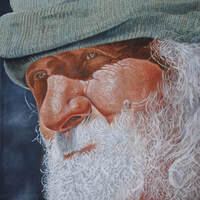 Join us at the Dahl Arts Center for Tronies | Mark Paxton Exhibition.

Mark Paxton is an artist, living and working in Gillette, Wyoming. He was born and raised in Omaha and joined the military, serving in Vietnam. Mark received his BFA in sculpture from the University of Nebraska at Omaha and went on to earn his MFA in Studio Art at the Art Institute of Chicago in 1984. He taught art at Sheridan College during the late 1980s and early 1990s.

Tronies is an exhibition of Mark Paxton's most recent paintings of large scale, close-up faces. The word "tronie" refers to a specific genre of 16th & 17th century portrait style paintings, particularly Dutch and Flemish paintings that were usually anonymous character studies as opposed to specific commissions.

Mark refers to himself as a "crowd source painter", someone who takes photos of people whose faces are of interest to him and the ideas he's pursuing.