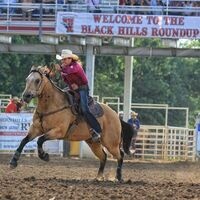 Feed your mind and your belly with Turtle Soup, featuring a presentation on historic Black Hills figures or events and a bowl of soup provided by Angel’s Catering.

This week, Paul Higbee presents, "The History of the Black Hills Roundup."

The Black Hills Roundup marked its 100th anniversary this year. Belle Fourche is home to this multi-day rodeo and Fourth of July celebration that has featured legendary bucking horses (beginning with Tipperary), world champion bronc busters, women trick riders - including Mattie Goff and the Tope Sisters - specialty acts such as the locally-based Olson buffalo show, and a visit by President Calvin Coolidge in 1927.

All of this has contributed to a rodeo that’s nationally acclaimed and going into its second century. It’s respected as an event that’s outdoors and true to the sport’s roots.

The Black Hills Roundup Committee commissioned Higbee for this research.

He was also writer/producer for a South Dakota Public Broadcasting documentary, “Leaving Redfield,” in 2019. He and his wife Janet live in Spearfish.