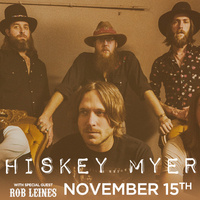 "You can tell when somebody is faking it," says Cody Cannon, lead singer and guitarist of Whiskey Myers, "and you can tell when it’s real.” This kick-ass band has been steadily building a devoted following with its gritty authenticity, and with their self-titled fifth album, they’re posed to explode.

Each one of the releases from Whiskey Myers has been bigger and bigger – following their break-out third album, 2014’s Early Morning Shakes, their most recent record, Mud, climbed to No. 4 on Billboards country c hard in 2016. And that was before the group was featured in Kevin Costner’s TV series Yellowstone in 2018 (not just on the soundtrack, but on screen, performing in a bar), which propelled the bands entire catalogue into the Top 10 of the iTunes country chart.