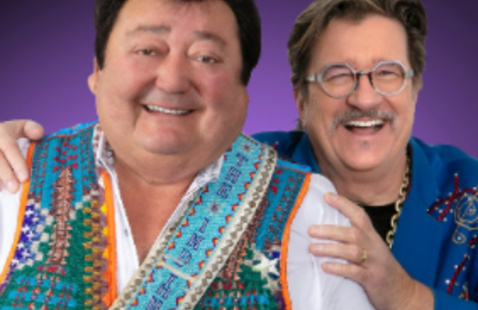 https://deadwoodmountaingrand.com/entertainment/ #VisitRapidCity
View map
Add to calendar
Save to Google Calendar Save to iCal Save to Outlook

Williams and Ree, Aka The Indian and The WhiteGuy, are a music and comedy phenomenon. This long running duo eschews political correctness and conformity and spins comedy gold from the union of a Plains Indian (Terry Ree) and a Western Angloid (Bruce Williams). The framework surrounding the comedic pair is music, which has earned them a CMA vocal duo nomination. Their television credits include Country Kitchen, HeeHaw, Laff TV and Comedy Central. They currently host Country Thunder Music Festivals around North America and are featured on Sirius Radio. Williams and Ree headline shows at fairs, festivals, theaters, casinos, and small, out-of-the-way dives. Recently appearing on the Grand Ole Opry.