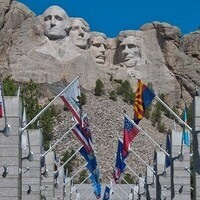 Mount Rushmore National Memorial, Keystone, South Dakota, symbolizes both national pride and an awesome feat of engineering. Carved from a mountain of granite and standing proud since 1941, Mount Rushmore, protrudes from the granite as a true "Shrine of Democracy" with the faces of George Washington, commander of the Revolutionary Army and first United States President; Thomas Jefferson, founder of the Declaration of Independence; Abraham Lincoln, abolisher of slavery; and Theodore Roosevelt, corruption reformer and wildlife conservationist.

2021 Exact event dates coming soon. Watch one of America’s most treasured monuments light up after dark. Beginning the Friday before Memorial Day each...